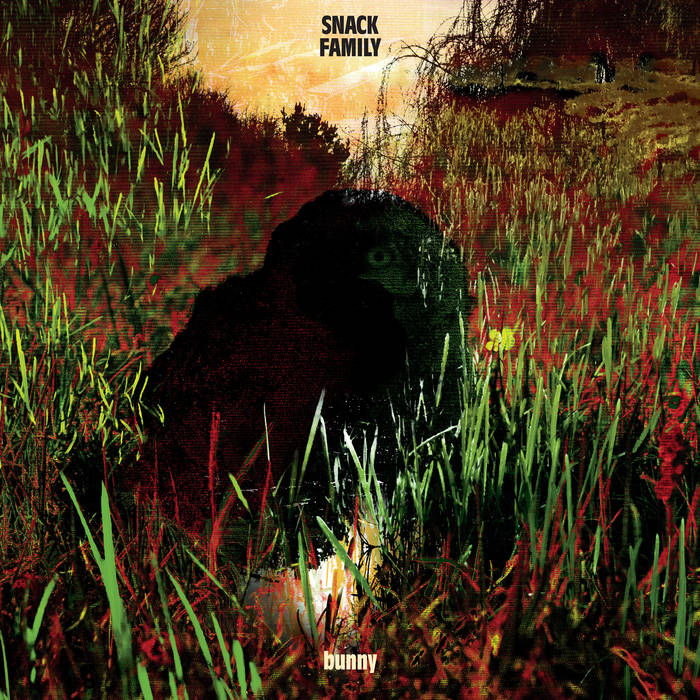 blackdogindustries Like Morphine met Beefheart and they had a lovechild that listened to XTC.
Favorite track: Anti-Climb.

To date Snack Family have released two excellent EPs, ‘Belly’ and ‘Pokie Eye’, which gathered a wealth of praise for their gnarly, twisted, mutated and mutli-angled jazz/rock/blues/swamp rock. They were only just revving up. Now they’re back with their debut full-length album ‘Bunny’, their best, most magnificently degenerate work to date. Think Blurt and Nick Cave, Albert Ayler, Captain Beefheart and The Cramps and you’ve some idea of the dirty power this trio kick up. If rock was dead, then this is the reanimated monster, breaking its restraints and tearing through the village, crying out to the skies, looking for love.

This time around, James Allsopp’s brilliantly rasping, haranguing baritone and alto sax and synth, Tom Greenhalgh’s churning drums and Andrew Plummer’s menacing and charming vocal growl are supplemented by guest vocalist the extraordinary Seaming To, a composer in her own right with a remarkable range. She plays a crucial role on several tracks; on ‘I Am Bunny’, she casts a beautiful, harmonic, white shadow, while on ‘Repeated Views’, she is a key dramatis persona on one of the album’s strongest tracks, which demonstrates there’s more to Snack Family than breakneck propulsion. With its complex instrumental web hovering, twisting and droning, ‘Repeated Views’ feels like the musical synopsis of some HBO drama, set in the Deep South where every swamp and backwood harbours a dark, untold story.

Elsewhere, this is fast-forward music which harks back also to better, dirtier times. Opener ‘The Strange Outside’ boasts a real grinder of a riff, physically working you over relentlessly, the way Snack Family do. ‘Automated Lover’ is the spawn of Northern Soul and Unknown Pleasures-era Joy Division, its lyric of disaffection and frigidity belied by its energy build-up, like an overheated fuse about to blow. ‘Supermarket Mortuary II’ erupts like the soil rising up to reclaim a Sainsbury’s branch, while the strafing machine gun fire percussion of ‘Lonesome As The Burning Sun’ fiercely exacerbates Plummer’s existential blues holler.

‘Anti-Climb’ deserves its own, customised category - Jazzabilly? - while ‘Smile’ emerges defiant, as if from a thorny hedge backwards, a typically, irresistibly purgative jam of muddy riffology and sax mania. ‘Love My Dog’ is sly stuff, showcasing the wry streak that courses through this album and which saves Snack Family from sinking into a quicksand of despondency, while ‘Blue Skin’, the story of a VERY physical relationship, concludes on another seductively atmospheric note, as the crickets chirp and the scented air grows humid.

With bad moons rising on both sides of the Atlantic, this is no time be anodyne. ‘Bunny’ is the sort of hard stuff we need right now, the bracing antidote in the year of the fightback.

"…a shedload of weirdness, genre hybridity, off-kilter grove and infinite rock ‘n’ roll swagger… …‘Bunny’ continues the trajectory of their work to date, grinding out low-slung backstreet dirt that throws the best bits of Foetus, PIG, Nick Cave, and Gallon Drunk into the blender. And what a belting job they do of it." [Whisperin and Hollerin]

"We have found the best experimental rock band that you will hear this week...We dare to say that these boys will grow into a highly respected act." - Noisey by Vice NL

"In recent years, English rock bands have been fashionable in appearance and a manicured sound, so it’s very exciting to discover a group with a genuinely messed up sound.” - [Les InRocks FR]

“Sleazier than Waits out on the pull with the Fat White clan, somewhere between The Amazing Snakeheads and Lurie’s art-jazzers The Lounge Lizards.” - [NME]

Will be released on Slowfoot Records on 5th October 2018.

London-based Snack Family have been offering their nudity-inducing low-frequency alternative since 2011.

This is music that gets right back to the heartlands, the heart and soul and meat of the matter. Music for the times we're sweating through. ... more

Bandcamp Daily  your guide to the world of Bandcamp

Benji B talks about his new compilation ‘Deviation Classics’